But the reason for no God on the left is with no God, there’s no morality, and there’s no right or wrong that anybody else gets to proclaim. And that’s the great source, for me, of societal dysfunction. ~Rush Limbaugh

Teach Truth about Life to Next Generation

CALLER: I’m doing well, Rush, and as a young conservative, I am deeply concerned with the heart and soul of America and Americans. As I see all that’s going on and the issues being brought up, I’m concerned that truth needs to be known and be told. That’s the only way this generation, the next generation, is going to survive is by knowing the truth. I mean, we’ve outlawed God. We’ve taken all of these things out of our culture and made unimportant things important. And truth needs to be known. We need to see this next generation know the truth. As a bus driver also, I interact with these young people, and I’m concerned. There’s obviously bright ones out there, but I see that they aren’t being taught like they should. And they aren’t being taught about God. And that concerns me.

The Left Removes God so there is No Moral Compass, Accountability for Actions

RUSH: It’s not just they’re not being taught about God. God is being systematically eliminated. Now, to people who might… Not everybody believes in the same god. There are a lot of religions that believe in “a” god. The left actually does not believe in a god much like you and I would. Their god can be the environment or it can be a concept like Gaia or whatever. But the reason for no God on the left is with no God, there’s no morality, and there’s no right or wrong that anybody else gets to proclaim.

RUSH: And that’s the great source, for me, of societal dysfunction.

RUSH: It may sound silly, but one of the primary fuels for religion is eternal life. “There’s more to this than just this. There’s more to all of this than earth,” and nobody will ever have any proof for it. It’s faith, trust in God, everybody comes up with their own ways plus their religious teachings to try to believe it and have faith in it but then you’re faced with people that believe it’s all bunk and they want to disregard all of it — and they want to laugh at, make fun of, and impugn people who have such beliefs.

And with it, they take away morality. They take away the concepts of universal right and wrong. You talked about truth. They even obliterate that, and they get to replace it with whatever they want, whatever advances whatever they care about and at the same time ridiculing and laughing at people who don’t believe it. In the process, the entire foundation of culture and society is whittled away. I have the same fear you do, and I’ve had it for much longer than you ’cause I’m a little older than you are.

RUSH: It gets risky when you talk about truth because who gets to define “truth”?

CALLER: Well, I know our founders, they all believed in God and the Bible, and maybe didn’t believe it exactly like I did, but — 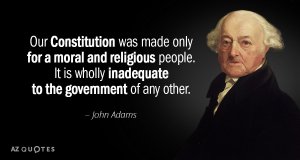 RUSH: No, there not… If you can find the right leftist, he’ll tell you now “no,” that’s a myth. The Founding Fathers were a bunch of atheists and they didn’t believe in God and they didn’t care about God,” and so this is taught. You know, your version of truth is gonna be countered by somebody else’s version of truth, and then the definition of “truth” becomes something over which people argue, just like facts have become. What’s needed is massive educational exposure to things, where people have much more information and input to be able to make up their own minds. But that’s what the left fears is people making up their own minds. People left to their own devices are not gonna choose what liberalism forces on people.

Without God, There Is No Truth

What Can We Do?

We can see that the trouble started when people abandoned God and the moral code based on His absolute truths. Our children, robbed of the solid values rooted in the biblical worldview, are left to sift through the murky swamp of moral relativism. Time for some major course corrections. The good news is that you can start now to find peace for your family in this challenging world. Here are some simple steps to start.

Secret to Peace for your family

If you’re looking for:

You have come to the right place.